If it flies it’s here – from Ballooning to Space…let’s play in the sky.

I’m Airborn is your exclusive network for

Duggy, the Smile in the Sky!

“As a firm deeply rooted in Northeast Ohio, we are honored and humbled to be recognized by our peers, and privileged to join our former portfolio companies who were also on this prestigious stage in recent years. This is a testament to the strength of the management teams with whom we have partnered,” said Sean Ward, a Partner with Blue Point. “We are particularly proud that so many of our best investments have been made here in Northeast Ohio.”

This is the fourth time Blue Point has received the ACG Cleveland Deal Maker Award, having also been recognized in 2006, 2013 and 2015. This achievement also marks the fourth year in a row that Blue Point or one of its portfolio companies was a recipient of an ACG Cleveland Deal Maker Award; two former Blue Pont II portfolio companies were recognized as the Private Deal of the Year in recent years – Area Wide Protective in 2016 and Trademark Global in 2017.

Create a truly great brand for your new company, your new product, or your new service offering?
Build a network of trusted business friends that make all your business building efforts easier, more successful, and a lot more fun?
Identify businesses that complement yours – and then create winning partnerships, mergers, or acquisitions?

Daniel provided answers to these questions and more – in this fast paced, free-wheeling interview and Q&A event at Innovate New Albany on December 8th.

It was an “unconventional, fun, edgy, educational, inspiring, mind-opening, and – on the periphery of wild!” session! 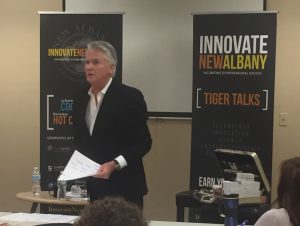 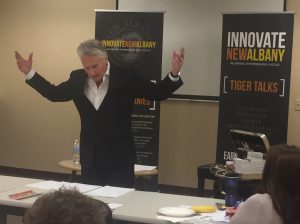 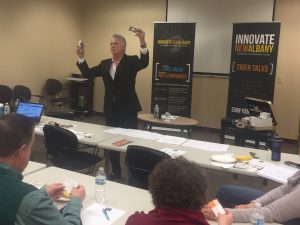 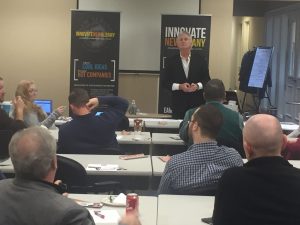 “put another notch in your gunbelt Daniel!”

Materion’s branding campaign received national honors from the Public Relations Society of America’s Silver Anvil Awards presented last week in New York. The Company was presented with the Society’s prestigious Award of Excellence for our category, which is second to the top Silver Anvil honors that went to IBM.

The public relations profession’s most prestigious honor, the Silver Anvil award acknowledges the highest level of achievement and is the established icon of the “best of the best” public relations practices.“Congratulations to the Corporate Branding Team and the many other Materion employees who were involved in making the Materion brand launch activities a success internally, with our customers and worthy of this recognition,” commented Patrick Carpenter, Vice President, Corporate Communications.  “What makes Materion’s Award of Excellence even more gratifying is to know that the IBM campaign that edged us for the top honors in our category won the overall “best in show” award among 143 entrants for all campaigns across a range of categories.”

One area in the U.S. economy that is booming, despite the sluggish recovery, is technology. Facebook and Groupon are expected to go public in the coming year, and tens of billions of dollars of venture capital continue to pour into the tech industry every year to support new companies.

But one of the first challenges new companies face is coming up with a name, which can be a difficult task.

For instance, would Google be as successful if it were named ‘BackRub’ — the name when the company started in 1996. And Twitter co-founder Jack Dorsey said his company considered calling his company Twitch instead. END_OF_DOCUMENT_TOKEN_TO_BE_REPLACED

Emaginit created the name “Materion” for the Brush Wellman company.

Brush Engineered Materials plans to change its name to Materion Corp. in March

CLEVELAND, Ohio — Nearly 80 years after it was formed, Brush Engineered Materials Inc. plans to change its name to Materion Corp.

Brush has changed its name several times since its 1921 founding as Brush Laboratories. But this will be the first incarnation of the company to drop the name that came from Charles F. Brush, the inventor the electric arc light and several other devices that were key in the early days of electric power.

END_OF_DOCUMENT_TOKEN_TO_BE_REPLACED

How many good ideas do you dream up in a day? We sat down with one creative who averages about 300. We asked him how he does it and how you can, too.

“A lot of people think creativity is…”

Powered by Paranoid Hosting™. 'Cause you never know...